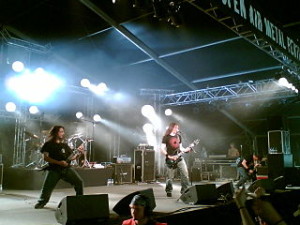 So, Out of all the new metal bands and its sub-genres, the few bands that, in my opinion, that are any good, are the old metal bands from the 70s to the 80s. Judas Priest, Iron Maiden, Ozzy, Black Sabbath, the list is continuous. But, what about today’s metal? Well, from the 90s – Today, will be what I base my reviews on for Guitar riffs and then the band as a whole. There will be two ratings thus given.  My reviews will be starting at the band’s recent song/album, then working backward to affect the ratings.

The first band for this brand new and exciting website/blog, is Gojira. They are a French electronic death/thrash/groove/progressive metal. The style of electronic, or technical enhancements are focusing on the Singer’s voice, and so far that does not sound too good. But then the guitars kick in and it is amazing, especially when the vocals finally start growling. The first song to judge is the “Born in Winter” off of their latest CD L’enfant Sauvage  2012, (The Wild Child).

The Song starts off with drums and guitar, my two favorite instruments together. The guitar is nice a calm and highly relaxing. It is paired quite nicely with the drums about three or so seconds after the guitars are started, giving a mood pick and urgency to the guitars. This is where the progressive part of the band comes in, it because boring due to the length of time it is played. The the crappy electronic vocals kick in. Now, I do love tech/electro but this specific style picked out for the vocals leave little to be desired. SO the over used guitar and drums go on until about 1;50, then the drums pick up first and the band finally starts to actually do something different. At 2:19, you get to hear how awesome the guitarist is. Riding with the guitar is the singer’s long growl and heavy drums, but they are done in a way to not overshadow the guitarist while actually emphasizing the different chords the guitarist is playing, mainly the scream, which goes along side to the main notes you can hear in the riff.

Unfortunately, the boring part kicks back in, the song has a rating of 3/10. The guitarist has 10/10. It, however, would not be fair is I only just rated that one song. So I then listened to the song of the same name, “L’enfant Sauvage”, and immediately a smile had crossed my face, the guitarist had come in heavy, angry, loud! The drums smashed right with the guitarist in the same “I hate the world and I don’t give a fuck” attitude which immediately gave me a sudden chill which fueled a need and desire to mosh and break faces. Then the crappy electro/tech vocals kicked in, and then the no change in guitar nor the  drums, giving me that boring dragging of the progressive metal. At least I can say the riff is a little bit better. The reason why I kept listening, is because at 1:10 the singer takes of the voice effects and screams, the guitar riffs change and the drums change and everything is once again incredible. Then around 1:25, the melody increases and they prove that they are very groovy, I wanted to dance and then towards the ending they repeat the boring beginning but briefly before they go into a riff and musical frenzy, adding a much needed change. The coolest part for the guitars is the slide between 2:26-2:28.

the screaming during the 2:00 mark is remarkable, the guitarist is just insane and incredible, the drums are epic, and then, the stupid electro/tech vocals kick in again and then you get a nice chill piece of instrumentals at 3:45 where the guitar is impeccable because of how soft and melodic the chord arrangement is. This song is 8/10 and the guitarist is again 10/10, it made me want to know his name; Christian Andreu

I will say this, I will listen to the rest of this CD but based on these two songs, they will follow a pattern of interesting > boring > amazing>back to the original boring> and something totally different than started with. So, the CD, knowing the singer will not change the effect of his voice, and knowing prog metal, I will rate 6/10 as the guitarist and the drummer save the band. I would only see Gojira live because of the guitarist and drummer, they make an excellent team.

The band’s rating as a whole, after I went back to the previous CDs, I have to say, the older stuff is a lot better, guitar wise, riff wise, even drum wise. the song “Rise” from the first CD is amazing!!!!!! the guitar, drums, and vocals are pure, effortless, angry, evil, neck breaking, ear shattering goodness. All that is holy of the music Gods, this song from their first CD Terra Incognita is the best recent death metal I’ve heard besides the other very obvious metal bands that make any headbanger say:  “Well duh, of course [that band’s name here]”

“Go back! To the source!” I found myself singing to “Rise”

Then I listened to “Love” the first emotion I am filled with is this mellow, calm, empty longing. It is a great day when a guitarist and bassist can make you feel emotions through their talents. Then the drums get heavier with the guitarist’s riffs. The singer is amazing, why did he even bother adding in the tech/electro aspect to the band? There is a hint of it in “Love” but it isn’t overdone, and it is a different vocal filter. Immediately as it is used, it is gone and filled with his amazing guttural growling. The guitarist begs you to headbang, the drummer makes your body sway, this CD is this band’s first and best. Filled with passion from all members. I can now tell you, that with the added prog metal aspect and tech/electro, the guitarist is not doing half the decent job as in this CD compared to their latest. So, after I went to the From Mars to Sirius CD and to the song “Flying Whales”. It is then I can hear the prog metal genre sneak its way into their music.

Thus, leaving me bored, even with the intro’s grooviness.The song is little over seven minutes. I love my lengthy music, I love classical too, duh, however, with prog metal, it is very hit or miss, you can’t take something repetitive and call it good. Nor can you make a seven minute song that repetitive and boring and expect people to like it. Yes, I realize there are prog metal fans, and I apologize; Seriously, even classical music is not this repetitive. at 2:28 in the song, the guitarist and drummer change beats and melodies (finally) but then you get the tech/electro on the vocals… WTF guys, wtf happened! And yes, the guitarist saved them, yet again, but his talent cannot stifle the amount of boring this song has. He has extreme talent, but the amount of time each little thing he changes, goes on for a long period of time. And from 5:01 -5:38 they go back to what the first CD had, but a little bit more well produced. and then back into the majority of what this song has.

I am afraid to go back the the CD before Sirius and to even listen to the other songs. I am however, giving the band a 7/10 because I know what they can do, from the first CD, which I will hold dearly to my chest and scream “WHY?!?!?!?!” as I cry to the fact they are wasting their talent. Well, thanks for reading and I will write another review in a week!

Bridget is a professional writer. Her hobbies include guns, knives, and archery.

Image of Bridget used by Bridget’s permission. Image of Gorija shot by Jarkko Iso-Heiko on July 2, 2006 and has the Creative Commons Attribution-Share Alike 2.5 Generic license.